Sooo, I've had an opportunity to speak at the Testing Automation Summit yesterday in Auckland. The event was organized and hosted by the Testing Mind, and they did a good job off it. I am certainly grateful to have had a chance to be a speaker once again - haven't done it in a few years, and it was nice (although nerve-wrecking, hi, social anxiety) to be back.

As promised at the conference, here I am sharing some resources from the talk for those interested:


Please let me know if there are any questions you didn't get a chance to ask at the conference!

Posted by testinglass aka Viktoriia at 15:05 No comments:

Just last week we were discussing one of the JMeter test scripts in our team, and it occurred to me that it would be useful to see the concurrency of the requests, meaning which requests run in parallel. That should very roughly represent which threads on the server are doing the same thing at the same time, and it is interesting as another way to look at what's going on during the test.

I knew there wasn’t such a chart in JMeter, because I thought about it briefly couple of times before and couldn't find it, but I was surprised to find that there wasn’t any ready to use tool to make that kind of chart. The closest I found was Gantt charts, but they are not designed to deal with thousands of requests and hundreds of threads. So I set up to make my own tool. In R, of course.

Here’s how the result looks (generated from one of the internal tests, legend cut off not to disclose anything): 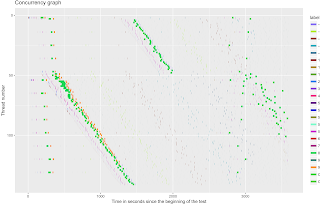 The chart above shows which requests are currently running on each of the concurrent JMeter threads. It gives a very high level picture of what’s going on with the concurrency (requests are shown in different colors each, so you can assess the concurrency just by looking here). It is kinda hard to read though, especially in a case like this where we have a lot of requests, long duration of the test and long user thinking times in between. So here's another way to look at the same data: 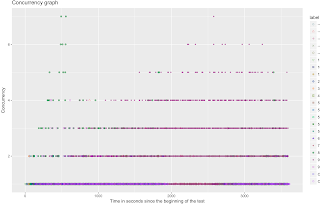 This chart shows calculated concurrency level for different points of time (points of time being request start times). Concurrency is calculated as number of “overlaps” - i.e. if in the first graph you were to draw a vertical line and count the number of same-colored horizontal blocks intersecting that line - that would be the concurrency level for the corresponding request, and that value is displayed on the chart as (request_start_time, concurrency). Calculation is pretty rough, for more precision we'd like to calculate concurrency at regular time intervals, not just at request start times - that does mean longer running time and even harder to read chart though, so I decided I'm happy with what I've got here.
Of course, even this chart isn't easy to read, so if you want to drill into the data, I suggest running R-scripts in interactive mode and either look at text data, or chart only the specific request you are interested in. The code is there, and is hopefully easy to understand.
It's all good and nice to look at the data from the tests, but for it to be really useful you want to know whether it resembles production. You can check that by producing similar graphs from production usage data, e.g. from access.log. Please note, that access.log can be much noisier than JMeter output files, since in JMeter we get to name the samplers, whereas access.log will have each request with all the URL parameters included. So before graphing or calculating concurrency, you'll need to clear the data and filter out requests you are not interested in (e.g. you might want to remove static resources and/or remove dynamic user- or session- dependent parameters from other urls). Example of such filtering is in the script.
https://github.com/hali/Performance-data-processing/blob/master/output/access-log_concurrency.R

Feel free to grab the scripts, and please let me know in the comments if they were useful, or if you see some error in the calculations.
Posted by testinglass aka Viktoriia at 15:09 No comments: